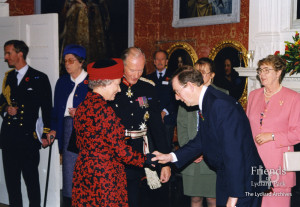 HRM Queen Elizabeth II visited Swindon in November 1997 to mark the renaming of the borough which reverted to Swindon Borough Council. Lydiard Park became a focus of the day and the venue for a civic lunch.

Her majesty was invited to sign a visitor page by Mr Gerard Leighton, President of the Friends of Lydiard Tregoz. She then attended a lunch for 50 people on the first floor of the house hosted by The Mayor of Swindon, Cllr Maurice Fanning and his wife Sheila Fanning.

Kitchen and dining staff from HTS Lydiard Park Conference Centre, together with park and museum staff, gathered in the main hall for the Queen's departure. Her leaving present was an oil pastel of Lydiard House in Autumn by local artist Peter Burton. 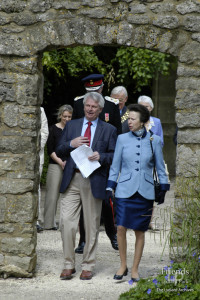 Princess Anne shortly after her arrival at Lydiard...