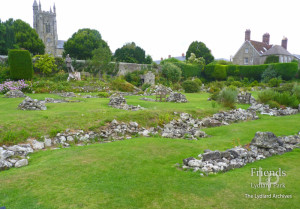 Shaftesbury Abbey was built in about 888 by King Alfred and it was the first religious house solely for women. Alfred installed his daughter Æthelgifu as its first Abbess and it became the model for other royal nunneries.

This Benedictine Abbey grew and prospered as Royal patronage and pilgrims to St Edward’s shrine housed in the Abbey Church of St Mary and St Edward, King and Martyr, made it very rich. King Edward’s remains which were eventually brought to the Abbey after his murder at Corfe in 978, were said to perform miracles. In time the Abbey came to own large estates in Dorset, Wiltshire and beyond.

Margaret Beauchamp’s daughter, Margaret St.John entered the order when she was about 12 years old. She was following in the footsteps of her mother’s great aunt, Margaret Stourton who was Abbess of Shaftsbury from 1423 to 1441. Margaret St.John was elected Abbess in 1460 a position she held until her death in 1492.

In March 1539 the Abbey was closed by order of Henry VIII. The nuns were forced to leave. Shaftesbury, the oldest nunnery, was the last to do so – and six hundred and fifty one years of continuous worship ended when the gates slammed behind the last Abbess, Elizabeth Zouche. Soon the Abbey became a ruin. 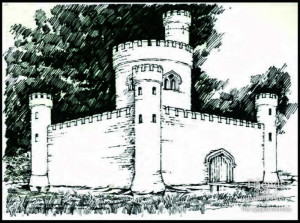 Although the moat has been partially damaged by in...