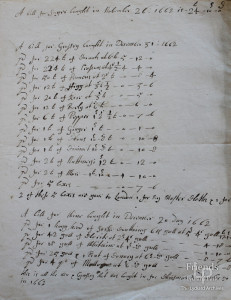 Christmas is seen as a time for celebration, fun and generally excessive eating, and drinking, and yet for a short period of time Christmas was actually banned. In the mid-seventeenth century parliamentary legislation was introduced to put an end to the frivolous and disrespectful behaviour engendered by traditional Christmas celebrations. In 1644 the feast of Christmas was abolished.

Despite rioting against the ban it was strongly enforced by Parliament. In 1656 shops and markets in London were ordered to stay open on the 25 December and soldiers patrolled the streets, seizing any food that might be prepared for a Christmas celebration. It was not until the Restoration of Charles II in 1660 that Christmas ceased to be illegal.

Lady Johanna and her husband, Sir Walter, were Parliamentarians and while there are no detailed records to show how they spent Christmas pre-1660, there are later documents which show that they knew how to celebrate Christmas in style, even to excess.

The documents above were written by Anna Smith, Lady Johanna’s housekeeper at Battersea. They list purchases for Christmas as well as gifts to servants. Gift giving had also been banned, and servants especially, must have been delighted that this particular ban was now lifted......

READ MORE: See the full commentary by Dr Lynda Pidgeon to discover the fantastic preparations that Lady Johanna went to in order to ensure the festive season was a success!